I was recently commissioned to produce a short graphic biography of the trailblazing writer Dorothy Richardson.

Even though she’s not quite a household name like contemporaries Marcel Proust or James Joyce, her writing (in particular the thirteen-book novel sequence Pilgrimage that became her life’s work) is now seen as an important keystone of modernism. Pilgrimage was deeply experimental in its style, and its semi-autobiographical narrative reflected the female experience in the bustling, artistically vibrant and politically charged London of the early twentieth century. It’s fascinating in many ways.

After familiarising myself with Dorothy’s life, it was a fun challenge to condense it into just four pages of comics, weaving in references to episodes from Pilgrimage where possible. Hopefully the result is a good introduction to her.

I chose to design the comic as a three-colour risograph print, which gave me the opportunity to experiment with a few techniques. It was printed by Joseph the risograph wizard at The Holodeck in Birmingham on recycled papers, and I’m delighted with the results: 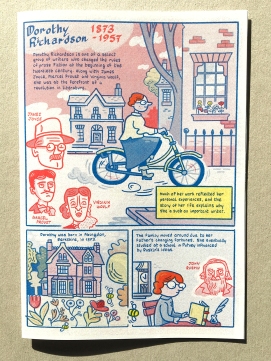 The comic coincides with a series of exhibitions about Richardson, and anticipates some new scholarly editions of her work and letters, to be published by Oxford University Press over the next year or so.

This blog post by Dr Adam Guy (who devised the exhibition and proposed the idea of a tie-in comic) is well worth a read, and you can find out more about Dorothy Richardson here.

Thanks to the Dorothy Richardson Editions Project, and the Arts and Humanities Research Council.

Author and illustrator. View all posts by Simon

I’m an illustrator and author, based in Oxfordshire. I’m currently working on my second novel.

Here I share short reviews of whatever I’ve been reading, as well as updates and thoughts about my writing, and occasional glimpses of my illustration projects.